The principle of the Wet Pendulum Tester to assess the friction characteristics of each specimen is by determining the wet dynamic friction between the specimen and the slider of a pendulum swinging in a vertical plane.

A rubber slider is attached to a spring loaded foot at the end of a pendulum arm (leg). The pendulum arm is released, allowing it to swing so that the slider contacts the wet pedestrian surface over a set distance of 126mm. The slider rubber surface of the device has to be conditioned prior to each testing. This is done using a grade P400 abrasive paper.

The extent to which the pendulum fails to reach its release height on the overswing is used as a measurement of the slip resistance.

There are two types of slider materials in use; the  Four S rubber (Simulated Standard Shoe Sole) and TRL (Transport Research Laboratory) rubber. Of the two, The Four S rubber is the one most commonly used.

Once the device is ready for testing, the surface is tested according to the relevant standard specifications. The results are recorded and a slip resistance test certificate is issued.

The table below will interpret the results and the certificate will nominate the corresponding classification as well.

The Building Code of Australia (BCA) has introduced Deemed to Satisfy (DtS) provisions for determining the slip-resistance to treads and nosing to stairways of all Classes of buildings and pedestrian ramps and landings of Class 2 – 9 buildings.

Coatings must meet, or exceed, the following classifications for stair treads or nosing to treads of a stairway:

In conjunction with MIROTONE AUSTRALIA we have been developed non-slippery top coat that comply with AS-4586 (Australian Building Codes Board) ABCB. Euroak Flooring® stair treads, ramps, stair landing and edging comply and has been tested for Australian Standard requirements P4, R11 and R12 if you required certify products for R11 and R12 please contact us

A Strip at the edge of the landing with a slip-resistance classification not less than that listed in below table, when tested in accordance with AS-4586 (Australian Building Codes Board) ABCB and where the edge leads to a flight below.

This Advisory Note relates to requirements for stairways, landings and ramps to have slip-resistant, non-skid or non-slip surfaces. It provides clarification of the Deemed-to-Satisfy Provisions introduced with NCC 2014 for NCC Volumes One and Two. For more information 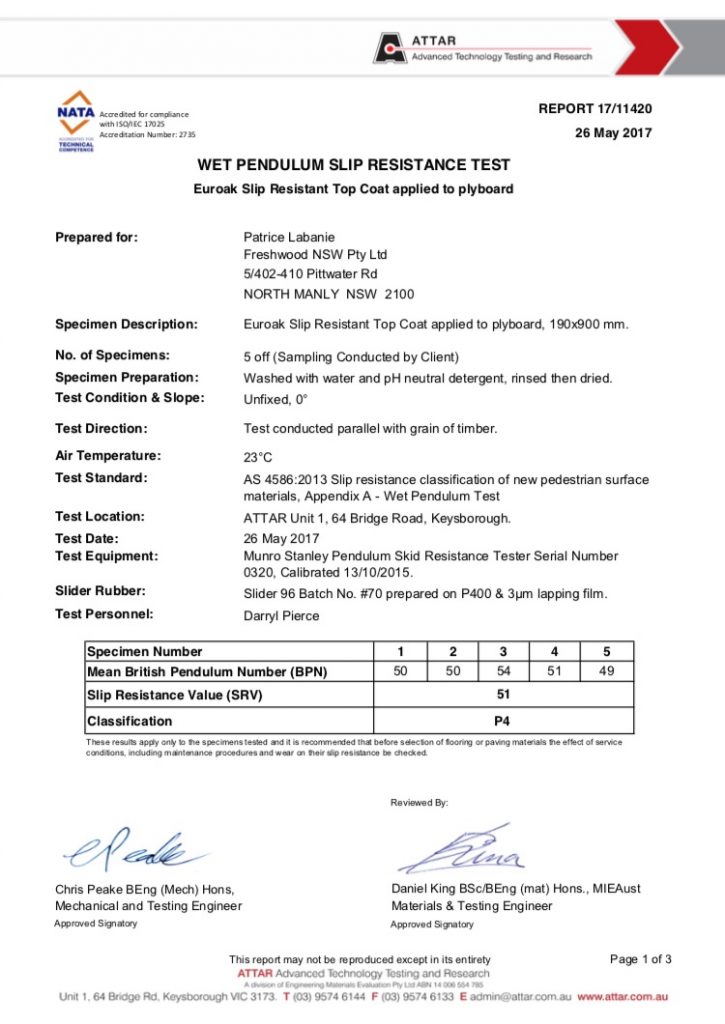 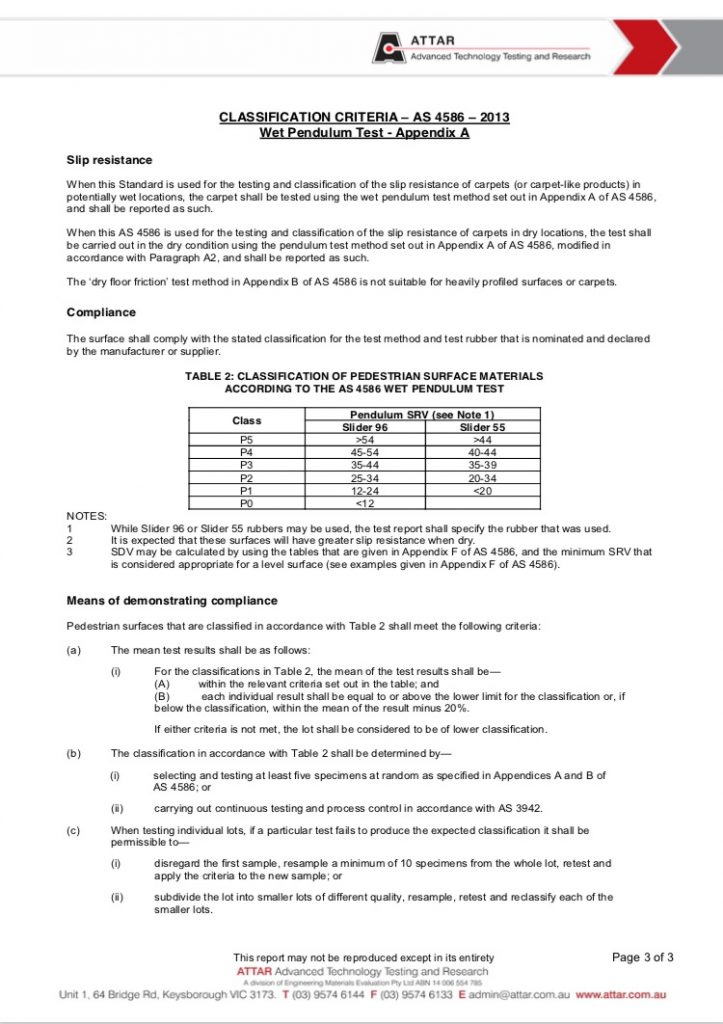 The most common form of slip resistance testing in Australia is the wet pendulum test. The associated classifications (above Table) are used for classification purposes (above Table). There is an obvious need to fill in the blanks in above Table, since one should be able to classify a product after it
has been tested. However, when products are tested with both rubbers, a significant scatter of results occurs. When potential classification boundaries are considered, the correlation is poor. This provides evidence that the

type of soling material has an influence on the slip potential.
Transport authorities measured the skid resistance of roads using the pendulum with TRRL rubber before it was widely used for measuring
non-slippery. This led to the brick paver and concrete paving industries adopting TRRL rubber. Four S rubber was developed later for measuring
the slip resistance of marginal internal floor surfaces. Manufacturers were expected to use one rubber or the other for testing their products, as appropriate for their primary market. The initial withholding of classes X,
Y and Z has forced some manufacturers to use Four S rubber. Recent CSIRO research suggests that TRRL rubber provides a better indication of wet barefoot slip resistance than Four S rubber, so some manufacturers might elect to test with both rubbers.

If one presumes that the interpretation for new products includes a factor of safety allowing for some loss of slip resistance (in the more slip resistant products) with time, then there are some potential difficulties in applying the same interpretation to existing surfaces. However, these notional interpretations were intended to be indicative rather than definitive.